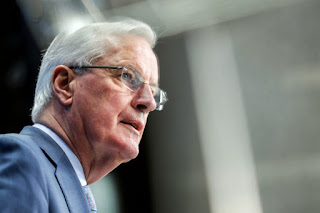 The EU wants the U.K. to discuss their points of difference in Brexit talks at the negotiating table rather than via letters — and made that point in a letter.
EU chief Brexit negotiator Michel Barnier answered a critical letter from his U.K. counterpart David Frost Wednesday, saying that "detailed discussions on substance are for the negotiating table." The exchange of letters came as the U.K. on Tuesday published a set of draft legal texts on its Brexit stance...
read more..
Posted by TRIFYLLIS ANTONIOS at 9:06 AM

Email ThisBlogThis!Share to TwitterShare to FacebookShare to Pinterest
Labels: BREXIT